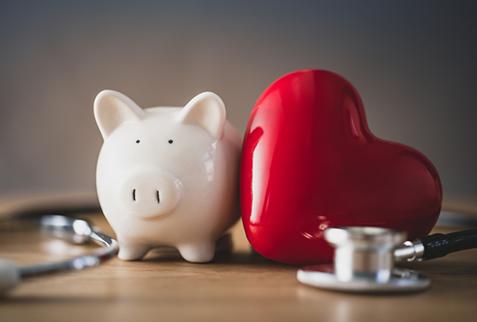 “Let sleeping dogs lie,” an expression that has been around since the 13th century, gained fame from Geoffrey Chaucer.[1] It refers to a belief that dogs are unpredictable when suddenly disturbed, so it might be better not to disturb them, because the situation could get unpredictably worse.

But is this really a good strategy, especially as the world slowly comes out of a major global pandemic during which the industry served its clients so well?

In early 2020, the world as we knew it changed forever. The World Health Organization (WHO) set up an incident management support team based on a reported cluster of pneumonia cases in Wuhan, China. By March 11,   WHO declared COVID-19 a pandemic. What followed was disability, death, business and school closures, travel restrictions, border closures, supply-chain issues, and political disruption.

Some people and news outlets downplayed the virus as a glorified flu, claiming that reported deaths were overstated and that medical professionals were attributing non-COVID deaths to COVID to earn extra money. The debates began, but the insurance industry knew the truth—mortality rates, which had been predictable and decreasing for years, began to rise. If not due to COVID, the world had bigger problems. And then the claims began to pour in.

The number of deaths in the United States has increased steadily during the past 100 years due to an increasing and aging population. During the past 10 years, this increase averaged about 1.63 percent per year.[2] However, in 2020, the number of deaths increased to 18.75 percent, according to preliminary calculations by the National Center for Health Statistics (NCHS) (see Figure 1). This is the largest increase recorded in the past 100 years, and much greater than the previous record in 1928 of approximately 12 percent.

In early 2021, the number of deaths increased by 0.82 percent. (Final numbers for 2021 should be available by the end of 2022, but they are typically not far off from mid-year estimates.) While less than the average of the past 10 years, this change is an increase over the worst year in a century and well higher than the run rate. Most, if not all, countries will exhibit similar increases in population mortality.

In fact, the United Nations Population Division reported a jump in world mortality in 2020.[3] Figure 2 shows that mortality was decreasing for 30 years, until 2020. If the figure showed all 80 recorded years, the same pattern would be evident. COVID-19 adversely affected all countries. 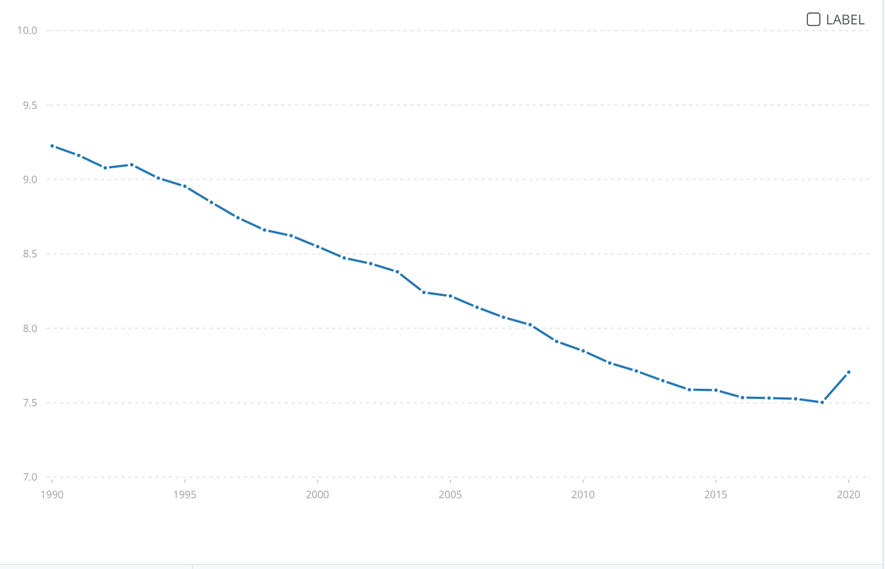 Industry mortality statistics from the U.S. Society of Actuaries (SOA) also show that COVID caused a dramatic increase in the number of deaths in the U.S. Figure 3 displays a quarter-by-quarter analysis of claim amounts for over 30 insurers, which represents more than 70 percent of life insurance business in the U.S.[4] The last column in the figure attempts to adjust for increases in age and inflation of claim amounts when comparing years 2020 and 2021 to the pre-pandemic year averages of 2017 to 2019. But no matter how the data is analyzed, claim amounts were significantly above averages. The first quarter of 2020 was actually below target, until COVID reared its ugly head at the beginning of the second quarter.

Group life insurance claims were higher than adjusted individual life claims in all quarters, showing that underwriting has an impact on survival for all diseases, including COVID. While underwriting will not filter out people who may contract COVID, it will filter out those more prone to death due to comorbidities.

Figure 4 shows that the number of in-force policies has remained quite level during the past 20 years. The average age of the policyholders has increased slightly, but the increase has been gradual during the 20-year period studied.

The most reasonable explanation for the huge increase in claim payments from 2019 to 2020 is a worsening of health. It cannot be a coincidence that policyholders’ health worsened at the same time the world experienced a pandemic. The 2022 Fact Book will undoubtedly reveal a worsening of claims for calendar year 2021. 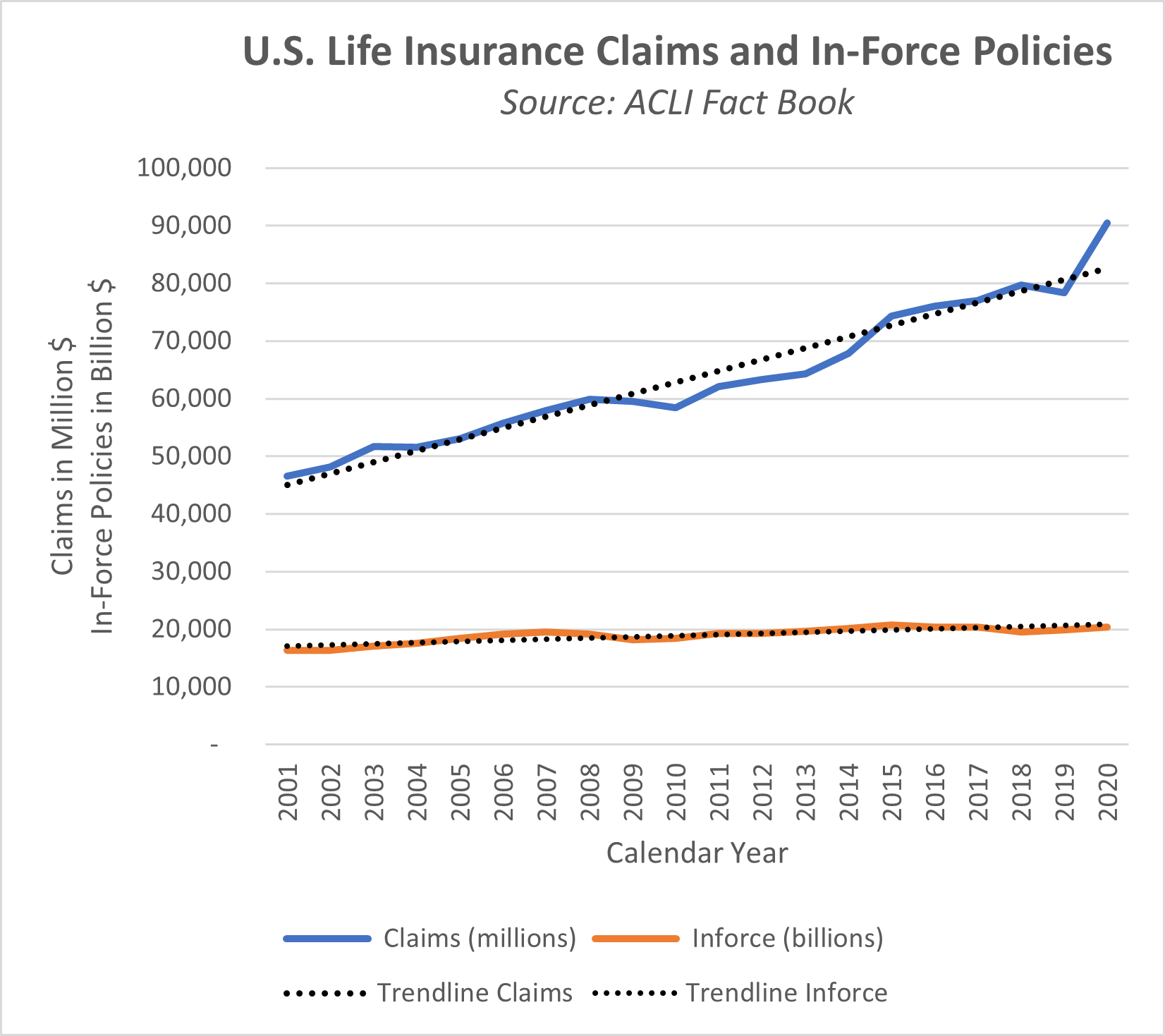 Insurers and reinsurers around the world have reported a significant increase in the number of insurance claims for 2020, 2021, and, to a lesser extent, the first quarter of 2022. For example, Scott Davidson, CEO of OneAmerica, reported that death rates for the working age population (people ages 18 to 64) were up 40 percent in the third and fourth quarters of 2021—an increase similar to that of the elderly.[6] He went on to say that this data applies to the entire industry and that OneAmerica expects to pay $100 million in disability payments due to the pandemic.

The Hartford Insurance Company reported that it paid $583 million in excess group insurance claims in 2021 and $239 million in 2020.[7] Conspiracy theorists arguing that governments are inflating the number of deaths and disabilities caused by COVID-19 is one thing, but insurance companies paying out billions of dollars in excess claim payments is another. Publicly held companies are not in the habit of paying claims to support conspiracy theories.

Reinsurers have also been seriously affected by the pandemic. Swiss Re, for example, reported that it paid over $1.6 billion in COVID-related life and health claims in 2021.[8] Reinsurance Group of America (RGA) reported a $1.4 billion loss for calendar year 2021.

While these are only some examples of excess life insurance claims due to the pandemic, all insurers and reinsurers that write individual or group life insurance most likely experienced excess claims for calendar years 2020 and 2021.

Whether or not mortality and morbidity rates will revert back to pre-pandemic levels in 2022 and beyond is difficult to predict. On one hand, some degree of auto-correlation is expected. That is, people can only die once. Some frail policyholders that would have died in the next few years have already succumbed to COVID. That should improve mortality results for 2022. On the other hand, many people were reluctant or unable to seek necessary medical treatments, such as chemotherapy, during lockdowns, so there could be a spike in deaths due to nontreatment of serious diseases. This spike could last for years, but should gradually decline.

Despite the significant increases in global population mortality, insured life mortality, and the number of insurance industry claims and claim payments, industry capital remains strong. Once again, the insurance industry has proven that it is resilient and able to withstand events as catastrophic as the worst pandemic in 100 years.

The insurance industry helps families during the most difficult times, which is why life insurers are truly unsung heroes. Disability payments have helped those seriously affected by COVID pay their bills while they recover, and life insurance has provided some financial relief for the families of those who unexpectedly succumbed to the virus. Yet the industry has not made a concerted effort to highlight these facts. The insurance industry, which does so much good for society, still has a poor reputation.

Many studies and surveys show that the financial services sector in general and the insurance industry specifically score very low compared to other industries regarding consumer trust and confidence. A recent survey by EIS found that less than 50 percent of respondents were confident that insurers will meet their basic needs.[9] How is this possible, especially when insurers and reinsurers met these needs during a pandemic? Perhaps the insurance industry doesn't promote itself because it is afraid to wake the sleeping dog.

But maybe it’s time to wake the sleeping dog and finally tell the world about the good that the life insurance industry does each day, but especially during the worst of times. This should be a coordinated effort by all companies through insurance associations. The message is clear: Insured people sleep better knowing they are covered for any unforeseen events that may occur. During the worst of times is when the industry performs at its best.

About the Author:
Ronnie has over 40 years of insurance and reinsurance experience having worked and lived in 3 countries.  In his current role, Ronnie serves as Executive Director to the Bermuda International Long-Term Insurers and Reinsurers (BILTIR) association.  He also is a Collaborating Expert of Health and Ageing for The Geneva Association located in Zürich. Ronnie is Co-Chair of the Programming Committee for the ReFocus Conference and served on the Board of Directors of the Society of Actuaries.  Before this, Ronnie worked as the Head of Life Reinsurance for Zurich Insurance Group in Zürich, Head of Life Reinsurance for AIG in New York and Global Head of Life Pricing for Swiss Re in London.  Ronnie began his career at Mutual of New York.  A little-known fact is that Ronnie holds a patent (US20060026092A1) for the first Mortality Bond issued called Vita when he was with Swiss Re.